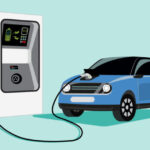 This article is written by We Love Tesla, the provider of one of the leading Tesla Valuation Tools in the UK allowing users to ‘Value My Tesla’

Due to the Pandemic, global events and the War in Ukraine with Russia being sanctioned – fuel prices for combustion engines and other fuel types have rocketed. This has made purchasing an electric vehicle more attractive for many motorists who had their travelling distances reduced during the Pandemic and may have already been looking for a replacement vehicle. The cost of electricity for homes has risen but the cost at the charging point compared to the cost at the pump is significantly cheaper. It costs about £15 or $19 to charge a vehicle and it’s currently costing around 5-6x that to fully fill up at the pump. This is huge savings per year that could see a faster and more attractive return on your investment.

When Tesla released the 3, it was priced at $39,000 or £42,000 at the time of release. This made it one of the most affordable electric vehicles produced and the cheapest out of all of the Tesla range. If you compare this to the Roadster’s $109,000 price tag when it was released – this showed a huge step in terms of catering to a growing market that wanted access to affordable electric vehicles. Tesla tends to be the trendsetters in the market that other competitors try and follow so there have been a number of affordable electric vehicles created from other major manufacturers such as Nissan as one example. This has made the electric car market boom and the competition always makes it so that consumers benefit because they have a wider range of affordable cars to choose from.

Manufacturers have actually banded together to share technology to increase the affordability of the production of their electric vehicles. Innovations to batteries, machine practices and the use of materials have seen a common goal to allow more motorists to be able to purchase electric vehicles realised. A number of manufacturers have shared these technologies and it’s not uncommon for this to happen. Volvo surrendered the patent for seat belts when they were developed in order to save as many lives as possible through standardisation of the seat belt for example.

There are Global Calls For Environmental Sustainability

A number of major countries including the UK & the USA offer incentives and grants to those who make the switch and purchase an electric vehicle. There are growing concerns about environmental impacts and one of the biggest changes that individuals can make is their mode of transport. This has made the switch to electric vehicles more desirable as well as the combined other factors that rising fuel costs, cheaper vehicles being available and availability being larger. Motorists now have a wide range of choices from different manufacturers when choosing a new electric vehicle. It will be highly interesting to see where the future takes electric vehicles and the electric vehicle market.

0 0 0
Previous : CarGuard Trevor Smith On The Potential Of Good Customer Service
Next : Should I get my car serviced at a qualified dealership?